Are Jade, Nephrite and Serpentine the Same?

Raven 3287 Comments Off on Are Jade, Nephrite and Serpentine the Same? 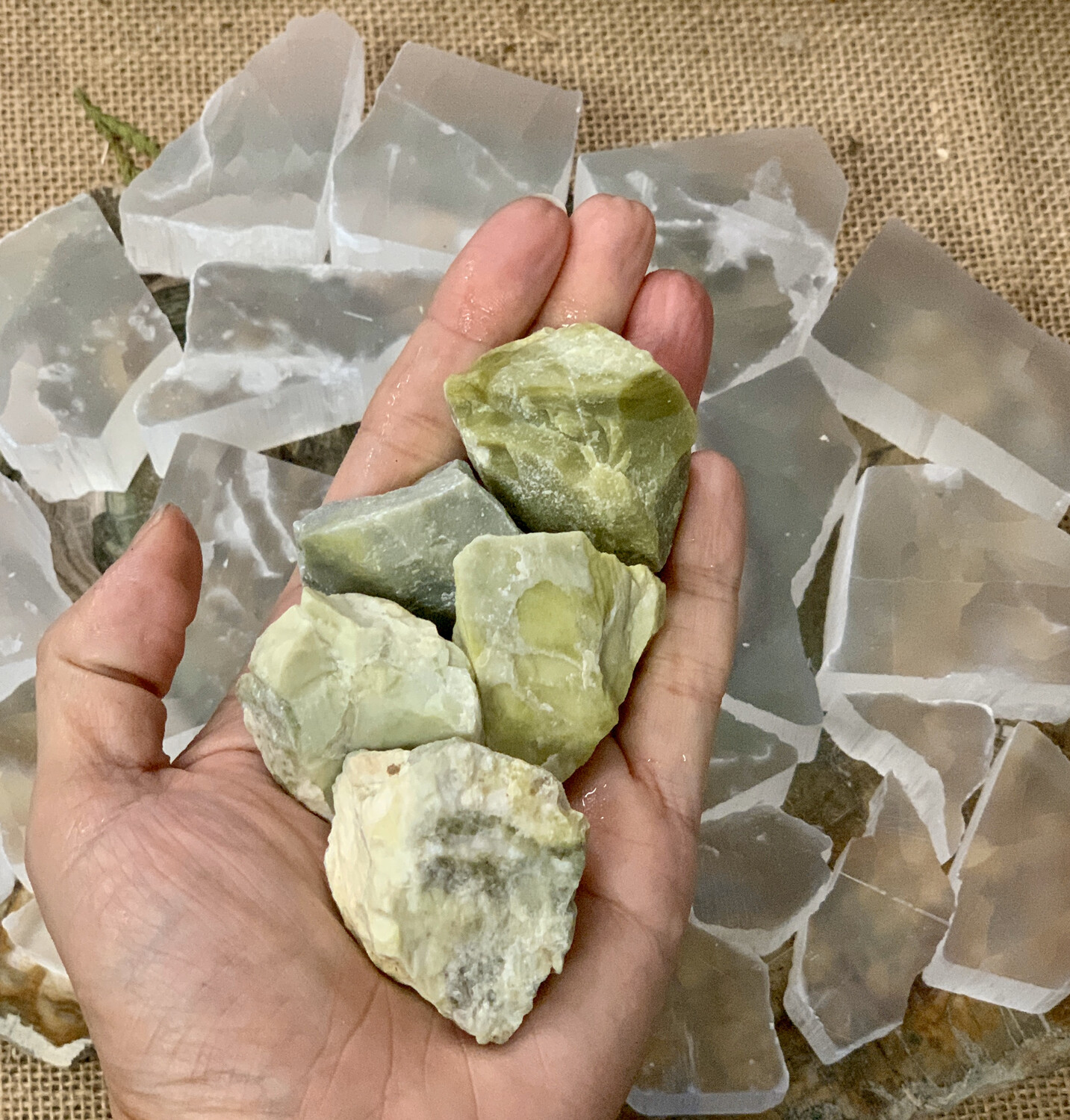 As we received a whole new shipment of Serpentine, Nephrite Jade, infinite and even lemon Jade, we did what we always do.  We hit the Geology forums and websites to make sure we have the correct items.  With so many trade names, metaphysical names and simply made-up names for crystals today, we always go back to the science of it – and that means Geology and Mineralogy.  So let’s dig in!

First we need to explain trade names.  When we refer to a crystal as a “trade name” it generally means that whoever is mining it, they want to be able to have exclusive rights to sell their crystals.  However, as you know you can find many crystals all over the world.  So generally trade names will refer to a specific crystal mined from a specific mine in a specific area.  Some crystals you use everyday are probably trade names and you don’t even know it!  Some examples are Blue Lace Agate (Blue Chalcedony from Namibia and South Africa), Super Seven, Passion Amethyst, Merlinite and more!

So, when we pulled up the name “New Jade” we found out that it is a trade name.  It is not actually Jade but instead it is Serpentine.  All Jade is part of the Jadeite or Nephrite family which is different than the Serpentine family.  But what is the difference? 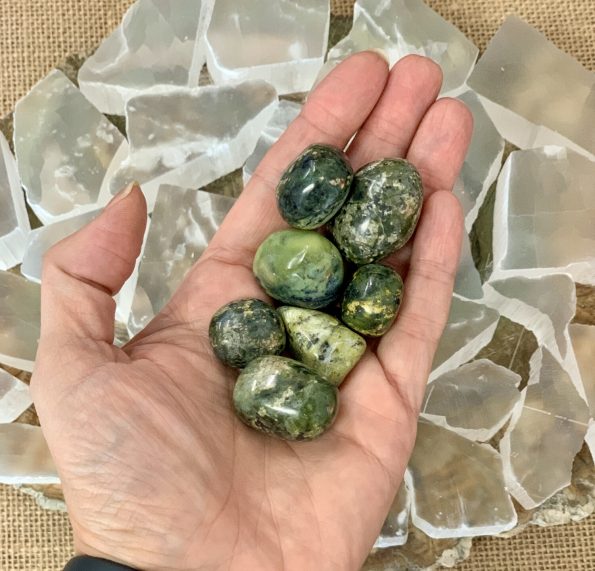 It is interesting to note that to the naked eye Jadeite and Nephrite can look pretty similar – so much so, that there are plenty of artifacts from ancient China that were noted as Jade but they are indeed Nephrite!  It wasn’t until the late 1800’s that were were able to distinguish between the two.  So today we know that Nephrite Jade and Jade, even though they are both referred to as Jade, are very different Minerals, although they are often accepted in the metaphysical community as being part of the jade family.

Jadeite is an aluminum-rich pyroxene, while nephrite is a magnesium-rich amphibole.  But what does all of that mean? They are both formed in igneous and metamorphic process, so the primary difference between them is chemistry and crystal structure.  This means that Jadeite is slightly harder than nephrite but not as tough.  It is also found in a much wider variety of colors vs. Nephrite.  However they are both generally referred to as Jade.  Energetically they are similar – with a few key differences.  They can both be used for abundance and prosperity and also for working with the heart chakra.

However, Nephrites generally have a calming energy that helps to connect with your higher self – in this sense they connect your heart chakra to your crown chakra.  This is one of the reasons that it is often used for all types of dream work.  Jadeites works a little differently and it does not have the connection with the crown chakra, but instead to the sacral, so it is often used for healing relationships and is often referred to as the stone of fidelity. 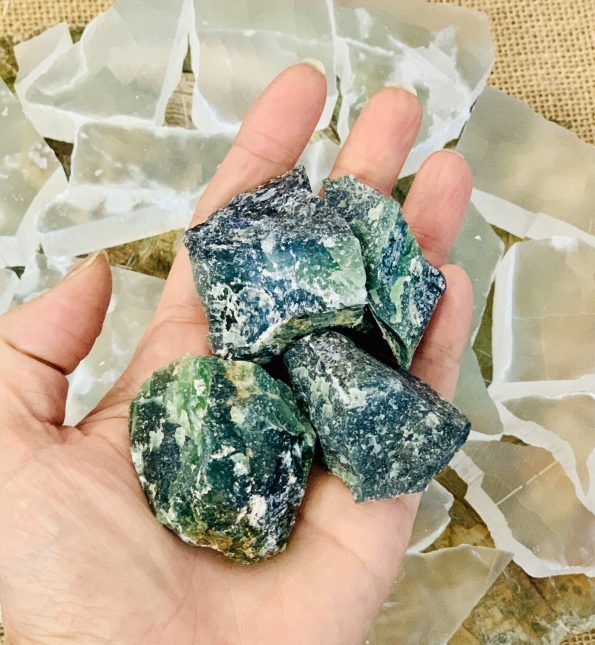 Antigorite belongs to the Serpentine Family!

So what about Serpentines?  New Jade and Infinite (trade name) are types of Serpentine crystals.  These crystals are so named because they tend to appear serpent-like.  Serpentines are also ultra-mafic rocks that can occur at plate boundaries just like pyroxene and amphiboles, but that where is the similarities end.  Serpentines need water in order to form, which makes the energetic deposits in this crystal very different than those of Jadeites and Nephrites!

Serpentines, like Nephrites and Jadeites can be used for all types of abundance and luck.  However, they have a strong connection with all chakras (simply because the elements are so beautifully balanced within Serpentines) which is why it is often used for chakra balancing and for all types of Kundalini energies. 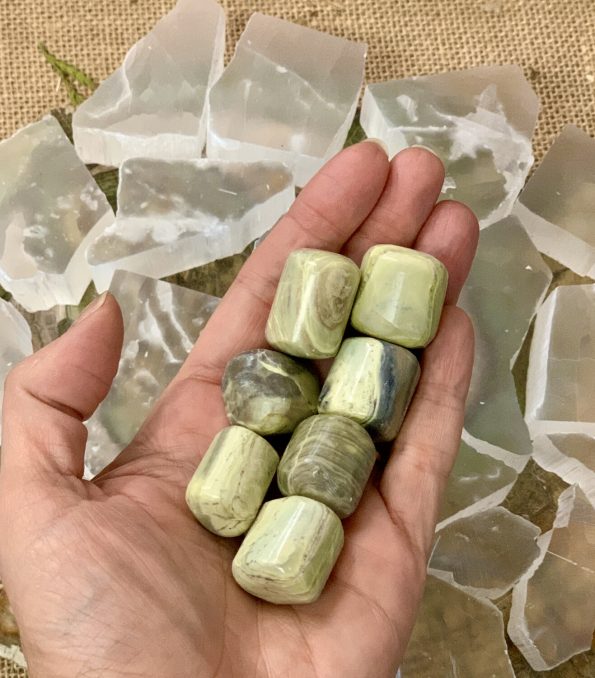 Infinite is a tradename for a type of Serpentine